Young Healesville CFA volunteer Ethan Adams is spearheading a new generation of firefighters and community leaders in the region. 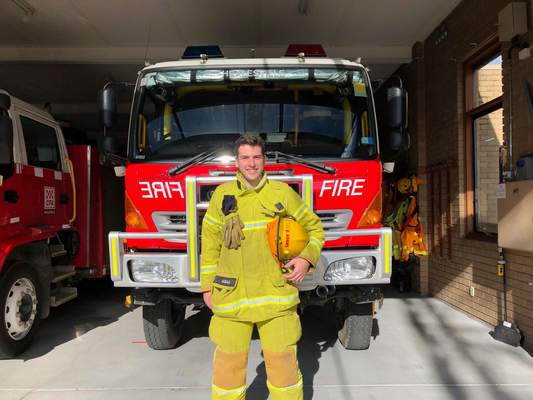 The 21-year-old is moving up in the ranks of the brigade, taking on the role of fourth lieutenant this year and he hopes other young people follow his example.

Mr Adams, who joined after leaving school in 2015 said, “I had free time and had seen the trucks around town and thought it would be a good thing to do to give back to the community.

“I just fell in love with it and I’ve loved every minute of it since. The mateship is great and you get to go out in the community to help someone and use the skills that you learn.”

Mr Adams works part-time at a supermarket and as a gardener, and has trained extensively to move ahead in the brigade and contribute to his community.

After completing his minimum skills training, he has undertaken breathing apparatus and structural firefighting training and will do crew leader and officer development courses as part of his new role.

“My role involves taking on more leadership and behind-the-scenes admin, running the Sunday rosters and hydrant inspections, and I’m also responsible for organising maintenance at the station, including the garden,” he said.

The Healesville brigade is busy, responding to about 200 calls a year and has about 40 operational volunteers, the strongest it has been for many years.

Mr Adams is no longer the youngest brigade member with two recent young recruits joining, and he is encouraging anyone in the community to consider volunteering.

“I’d definitely encourage anyone to join. There are times when you go to incidents that are hard to see but there’s a feeling of mateship and doing something positive for the community. It’s very fulfilling to learn new skills and put them into practice.”

“That’s part of what we do. We’re here for the community,” he said.

Volunteer Fire Brigades Victoria CEO Adam Barnett said volunteers are the cornerstone of local communities and their experience and willingness to drop everything made a huge contribution to the safety and response capacity of CFA and the protection of Victoria.