Eight years on from Black Saturday, and with about $50,000 donated to the Healesville CFA, Black Saturday Remembrance Cruise organiser Stacey Kinsmore is gearing up for the event’s sixth run through the valley. 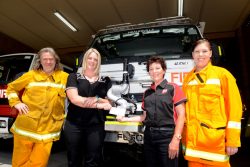 On Saturday, 11 February, hundreds of vehicles from around the state are expected to roll into Yarra Glen, where the cruise will depart from its new starting point – the racecourse on Armstrong Grove at 1pm.

As with the previous five years, the cruise will make its way through Toolangi and down to Healesville railway station at 2pm, where a sausage sizzle, live music performance and remembrance ceremony will be held.

Ms Kinsmore said the new starting point would be safer for participants compared to the old gathering point in Lilydale and that, though the route would be shorter than in previous years, residents could still watch from vantage points along the Melba Highway.

She said the events brought about 700 vehicles of all kinds – from hot rods, trucks and classic cars to motorbikes and regular cars.

Though the event draws plenty of visitors for the music, sausage sizzle and car-viewing, Ms Kinsmore paraphrased Casey MP Tony Smith and said the cruise was about quiet reflection – both during the drive and during the ceremony.

“Everyone can have that little bit of quiet reflection, in their own space, in their own time, in theory own car, as they go through the area, and we all come together at the end,” she said.

She said she hoped to raise $10,000 for the CFA this year, following last year’s $9000 donation, and that small groups may receive a portion of the donated funds if the event was successful.

But Ms Kinsmore said fund-raising efforts were hampered by people joining the cruise along the drive or parking at the railway station and not paying the $10 registration fee and by leaving their rubbish at the event, which she and her husband, Troy, then had to clear up and dispose of.

“If you don’t have that entrant sticker, and try to turn up at Healesville without it, you will be asked to pay or not park there – it’s just important to be fair on everybody else,” she said.

The event was started in tribute to Kate Ansett, who was one of the 173 people who died during the 2009 Black Saturday bushfires.

Ms Kinsmore said residents wanting to pay tribute during the remembrance ceremony, which started at 3pm at the railway park’s labyrinth, could bring a piece of evergreen to lay in the centre.

Eight years on from the fires, Ms Kinsmore said it was important to give people the opportunity to mark the occasion each year.

“I think it shows that we haven’t forgotten, and that proves it, with the amount of people that do turn up,” she said.

“It’s important, also, to remember that Black Saturday was very bad and it could happen again – it makes people think about their fire awareness as well.”