By Derek Schlennstedt and Kath Gannaway

Your home is often your sanctuary, a place with cherished memories and precious items; a place often built by the heart rather than the hands.
As Yarra Valley residents we are all aware of the devastating impact that fire can have, and so our thoughts go out to anyone who loses a house; whether through bushfire or house fire we reach out to help those affected.
Healesville’s Latin family was left devastated after their newly-renovated home went up in flames in the early hours of Monday morning, 26 June. And the community has responded. 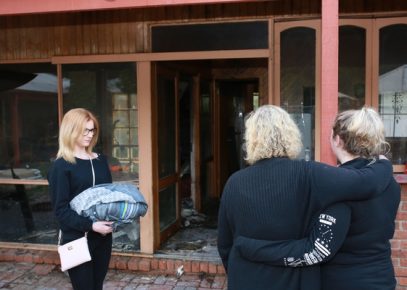 A doona cover that miraculously survived the fire is a welcome find for Suan Latin and daughters Gabby and Nadia 170172_05 Picture: DEREK SCHLENNSTEDT

The fire started in the roof from a ducted gas heating unit and quickly spread through the house they have called home for seven years.
With only enough time to grab the bare essentials, the Latins stood on the road watching the inferno engulf their belongings.
“It’s gone right through the house,” owner Suan Latin said, returning on Friday with daughters Nadia and Gabby.
“The whole roof was alight from one end to the other.”
Healesville CFA Captain Graeme Bates said the fire had destroyed the house.
“It was complicated because the whole roof area was on fire,” he said.
Units from Healesville, Badger Creek and Bayswater’s Breathing Apparatus Unit responded and brought the fire under control in 20 minutes, but by that time most of the damage had been done and there was very little left uncharred.
“As the roof and ceiling joints burnt through, the plaster fell down and we were able to see up into the roof and put it out,” he told the Mail. 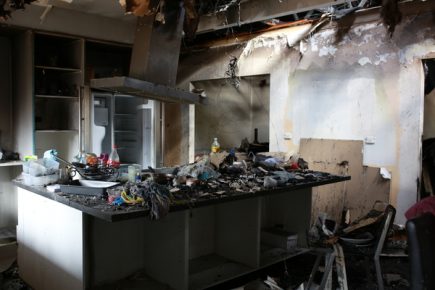 Rhys, Suan’s 19-year-old son was having a restless night and was heading off to bed when he heard a strange noise.
It was only when he investigated that he noticed a flickering in the roof and raised the alarm, rousing his younger sisters, Felicity and Liana, then the rest of the family and two friends staying over.
“He thought he heard the ducted vacuum system turned on in the carport so he thought there was someone out there,” Suan said.
“He realised it was a fire when he saw the flickering in the ceiling.”
The family of six has since found themselves divided, with Suan and the Grade 6 twins living with a grandparent and the others staying with family and friends throughout the Valley.
Their devastation was compounded when they discovered their insurance had lapsed.
Left with a mortgage to pay, and without an option to subdivide the large Badger Creek Road property, the family is facing a financial nightmare with no end in sight right now. 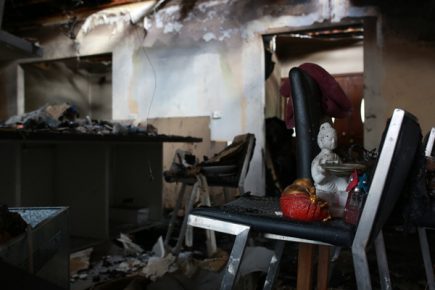 “It’s up and down like a roller-coaster, one minute we’re laughing and the next minute we’re bawling our eyes out,” Suan said.
“We’re all still in shock, it still all doesn’t feel real, especially when you come and see it again … it really hasn’t sunk in, just what we have lost.”
“Thankfully we are all alive, but we’re not all together at the moment, and that’s the aim, to get us all together in one place again.”
Nadia said the response from family and friends, and from strangers, had been amazing.
“We want to thank all those people who have donated clothing, especially for the girls, and for all the offers of support,” she said.
Healesville Primary School has set up a fund to help the family with immediate necessities, and a relative has set up a Go Fund Me campaign aimed at raising $2500 to help with short-term accommodation and clothing.
A register of offers of donations of larger items has also been set up for when the family finds other accommodation.
The Healesville Primary School account for donations is BSB: 633 000 157 076 910 “Latin Donation” and donations can be made online or over the counter at the Bendigo Bank branch in Healesville.
The link for the Go Fund Me campaign is http://www.gofundme.com/family-fire-tragedy-help-with-needs.