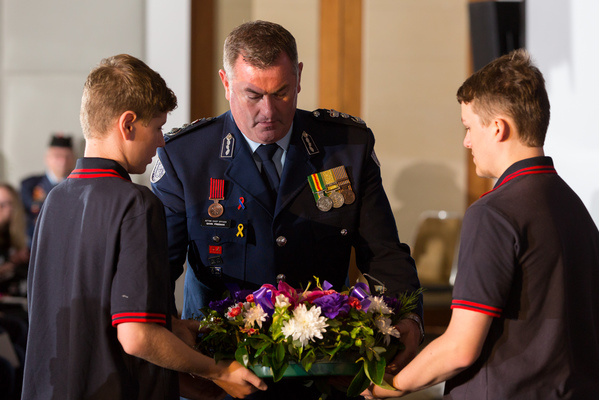 More than 250 people attended a service in Healesville to honour fallen CFA firefighters.

Healesville RACV Club hosted the CFA Annual State Memorial Service on Sunday 5 May, to pay tribute to the 79 firefighters who lost their lives in the line of duty.

Acting CFA CEO and Chief Officer Gavin Freeman said the service was a time for solace and reflection.

“This annual service is an important day for our members and the affected families to gather to recognise the extraordinary dedication of those CFA members who died while protecting the community,” he said.

“We also honour the personal sacrifices and commitment our firefighters make each and every day.

“We will continue to carry the memories and heroism of those fallen firefighters and reflect on their legacy that lives on in CFA.”

Mr Freeman said this year also marked 10 years since the February 2009 bushfires, which claimed 173 lives, including one firefighter, and destroyed thousands of homes.

“We reflect on the incredible courage and bravery shown by CFA members, their families and the affected communities across the state as a result of those devastating fires,” he said.

This year’s memorial service also looked back on the 1939 fires, which led to the CFA being established, the 1943 Tarrawingee fire where 10 firefighters lost their lives, and the devastating 1969 fires where two volunteers perished.

Ceremonial banners embroidered with each firefighter’s name are taken to every memorial service to represent the names commemorated on the memorial wall.

The CFA Annual State Memorial service is held on the Sunday closest to International Firefighters’ Day and St Florian’s Day, 4 May as St Florian is the Patron Saint of Firefighters.