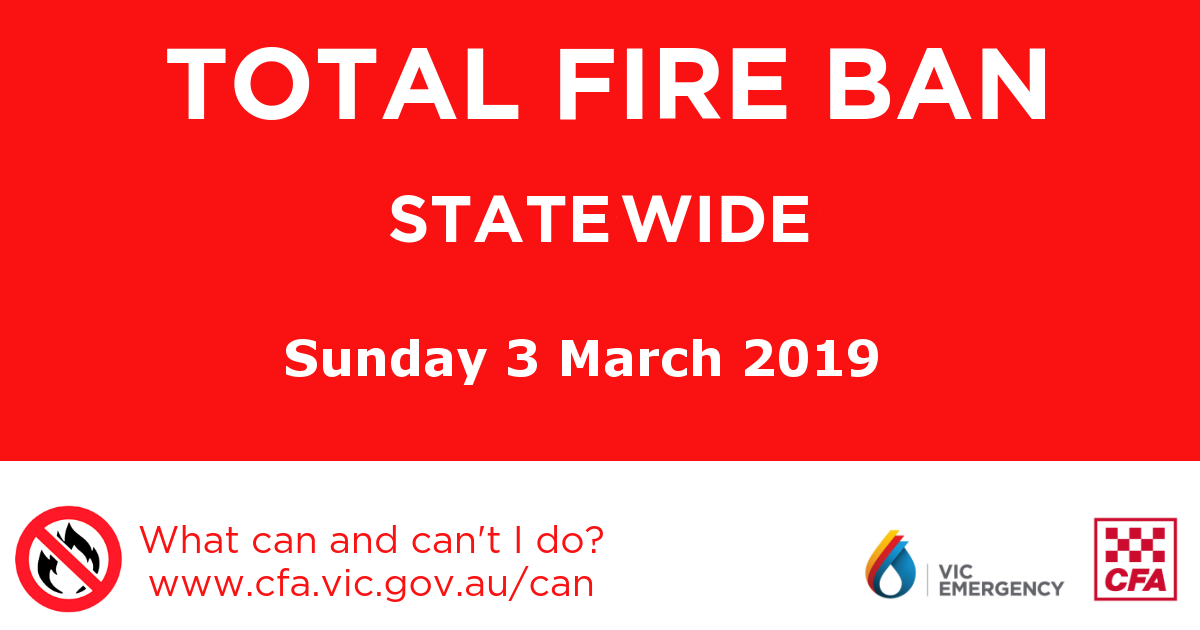 No fire can be lit in the open air, or be allowed to remain alight, anywhere in Victoria, between 00:01AM and 11.59PM tomorrow.  The Total Fire Ban remains in place the South West District for the remainder of today.

The Bureau of Meteorology is forecasting another hot and dry day tomorrow with temperatures reaching in the 40s for the top half of the state.

Senior Forecaster, Tom Delamotte said, “The forecast is for very hot temperatures continuing for the rest of the weekend without much relief from the heat overnight.  This means that if we have fires in the landscape they could challenge firefighters.”

“This is the hottest start to Autumn in 30 years, following the hottest Summer on record.  Tomorrow’s Fire Danger Rating is Severe in the Central District and Very High in the remainder of the state”, he said.

“It is important that everyone remains vigilant and doesn’t light fires in the open tomorrow,” State Response Controller David Bruce said.

“There are 40 Going fires in Victoria including the 20 new fires started from lightning last night, and the fire risk continues as we are expecting more thunderstorms with dry lightning later today.  People need to ensure they are prepared.”

“Stay aware of your surroundings and if you’re travelling or in unfamiliar places, make sure you are aware of the local risk. Know how to stay informed and never rely on one source for emergency information.”

“Look after yourself in the heat.  Drink plenty of water and check in on others. Look after those most at risk in the heat – your neighbour living alone, the elderly, the young, people with a medical condition and don’t forget your pets.”